Budget Resolutions are Easy–Follow Through is What Matters

Budget Resolutions are Easy–Follow Through is What Matters Welcome to the Congressional Budget Resolution, the show where everything’s made up and the points don’t matter.

The continued high stakes struggle by the Senate Republicans to come to a consensus on health care reform has taken the spotlight for how out-of-sorts the governing Republican party is right now.  But their colleagues on the other side of the hill are attempting to one-up them.  The House Republicans cannot even agree on a document that has no effect – the budget resolution.  But, their failure to pass a check-the-box resolution would come at great cost.

To understand why this keeps happening, first one needs to know that the congressional budget resolution is typically a joke.  Budget resolutions do not go to the White House to be signed into law.  They are not even binding.  They are just political documents that allow members to tout their vision for the country without making any of the difficult choices on how to get there.  That is why year after year, Republicans have been able to roll out and pass a budget that will purportedly put the country on the path to balance in 10 years.  Everyone votes for it knowing the numbers are fake, pats themselves on the back, and then do absolutely nothing to actually make the policy changes necessary for a balanced budget to come to fruition.

However, there is one critical component that can make budget resolutions meaningful under the right circumstances: reconciliation instructions.  A budget resolution can include reconciliation instructions that sets in motion the process for Congress to pass fiscal policies with only a simple majority in the Senate – rather than the typical three-fifths.  And even this only matters when the same party controls the House, Senate, and White House.  In other words, this year reconciliation will work and passing a budget resolution actually matters.  Amazingly, the House Republicans are achieving the unthinkable.  They cannot even agree on the fake numbers in order to get to the substantive parts.

The disagreement comes down to how many cuts to mandatory spending should the reconciliation instructions contain, the amount of spending on defense and the use of budget gimmicks to boost defense spending, and how detailed the tax reform plans need to be at this time.  The moderate Republican Tuesday group wrote a letter indicating that the $200 billion in mandatory spending cuts over the next 10 years is “not practical.”  Which is, well, ridiculous. As the Committee for a Responsible Federal Budget (CRFB) points out, “the proposed $200 billion in savings is less than one-fiftieth of the $10.9 trillion the Congressional Budget Office (CBO) projects we will add to the debt over the next decade if lawmakers do not act.”  What is not practical is the current trajectory our nation’s finances - $20 trillion in debt with a policy trajectory for tens of trillions more. 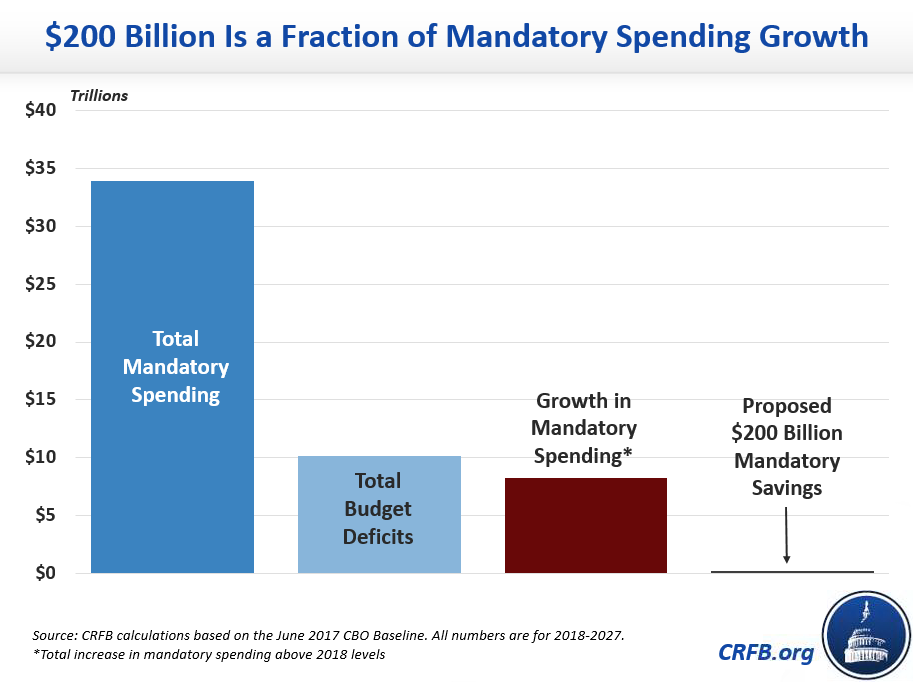 On the other side is the House conservatives, who believe that the reconciliation instructions should go further and that more details are needed for the planned tax reform – even indicating that they want to make sure it adds to the debt.  But, reconciliation instructions set minimum levels.  $200 billion is a floor, not a ceiling.  They can, should, and really must push for deeper spending reductions when it comes time to pass the reconciliation bills that contain policy changes.  But that is not this budget resolution.

Passing a budget resolution is the easiest achievement a majority party can accomplish.  But this time there is more on the line than touting a fake promise to balance the budget.  A budget resolution can unlock the tools to finally reform the broken tax code and achieve substantive debt reduction.  Those reforms will undoubtedly be tough, but first Congress must get through the easy part.